Lu Hong, was born on December 28, 1959, in Qin-Huang-Dao, China. During the late 1970’s, while Lu Hong was attending high school, channels of communication were reopened to include information from the outside world. It was during this time that Lu Hong’s family was visited by his father’s younger brother, Ting Shao Kuang, who was the acknowledged .leader of the Contemporary Chinese art movement known as the Yunnan School.

Ting recognized his nephew’s talent and encouraged Lu Hong to consider pursuing a career in art. In 1979, immediately after graduation from high school, he moved in with Ting and began to study under his tutelage. He learned everything that he could from his mentor until Ting immigrated to the United States two years later.

The education that Lu Hong received during these two years prepared him for his admission to the Central Academy of Fine Arts in Beijing. Despite the honor of attending this school, Lu Hong quickly became frustrated by the academic restraints imposed upon him. After attending the Academy for a year and a half, he left to experiment and develop his talent on his own.

From 1983 to 1986, Lu Hong painted, studied and absorbed information from every available source open to him. He was influenced by the works of Paul Klee, Modigliani and Picasso. He listened to the classical music of Chopin. Mueller and Wagner, and read books on poetry, Western literature and psychology. Lu Hong feels this was the period when he matured as a person and a painter. Lu Hong moved to the United States in 1986 where he has become one of the most acclaimed contemporary Chinese artists in America. 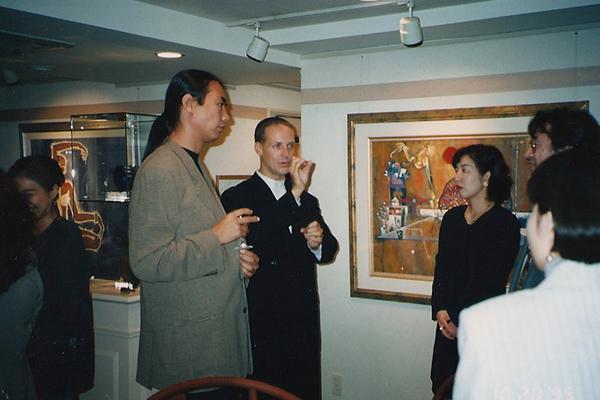